It would seem there is no need to wait for the countdown as this new site is up now showcasing this weekend's announcements which, unfortunately, also include an announcement of an announcement. Obviously you'll want to explore the site, but here's the highlights of what you need to make sure that you see:

1. Comic Book. Digital version of the C2E2 comic giveaway introduces 3 of the characters. Comic is being given out at the C2E2, it seems. 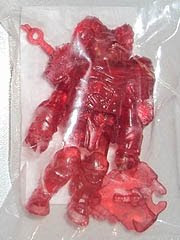 2. C2E2-Exclusive Clear Vorin Figure. Vorin is a ram, and he's the show's free figure. The toys page shows him (bagged) as well as the 4 previous promo figures, all of which have no specific character name.

3. Character reveals. 3 characters are named - Vorin the Ram, Gruntos the Walrus, and Merk the Edie Falco.

4. Series 1 and 2 are mentioned by name but will not be revealed until later. Series 1 is said to be coming Fall 2012, and revealed at Comic-Con in San Diego this July.

There is no obvious connection to Beast Saga. Aside from the basic concept and what appears to be a flame symbol on Vorin's outfit, there's no real connection to the old Hasbro or Takara toys either. It looks fun. I'm in.
Posted by Adam16bit at 3:24 PM