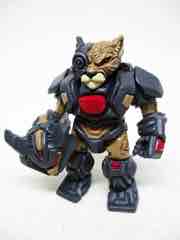 Another nod to a classic and rare action figure, Armorvor Kugarrec hit as part of a trio of new creatures near the end of September. And it's good. Our new pal evokes a classic figure from the Laser Beasts range known in English as "Scope Cougar," named after the game early 20-something toy collectors do at Target at toy runs. And now that I have alienated all of you, I can just gush about this one.
[ READ THE FULL REVIEW ] 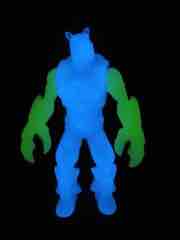 A surprise! In June 2019 I got a message from Jon "Little Rubber Guys" Karis with glow in the dark blue and green versions of his Rhinoceros and Scorpion figures. No names, no dates, just a surprise - and of course, I immediately had to photograph them for a review in the future. I shot Rhino and Scorpion - Blue and Green Glow individually, and it turns out they'd be a four-pack. Ah well.
[ READ THE FULL REVIEW ] 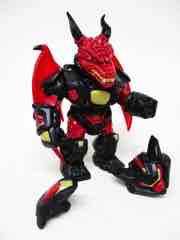 Along with the Kugarrec and Arthrodak flavors, the Armorvor Neo Wyverillian dropped three new heads on us all at once - which is kind of stunning, given the Armorvor has only been a Wolf and Neo-Granthan for the last 8 years. Due to Matt Doughty's hesitance to waste anything, this figure is particularly curious - the dragon head is painted grey plastic, and the wings are molded in red plastic. What other parts are hiding out there for future release?
[ READ THE FULL REVIEW ]

Why even phrase it as a question? Dropping in about 28 hours, Onell Design posted a preview of its Savage Cybernetics.  Three new Armorvor heads are visible, one of which is a clear nod to the holiest of molies, Laser Beasts Skull Grotess.  Previous Armorvor figures have been great, and we've had Wolf, Armored Wolf, and dinosaur-like Neo Granthan heads so far.

Presumably at least three figures are coming Sunday at 9:30 PM Eastern, so mark your calendars.  Or don't, so I can get mine first.
Posted by Adam16bit at 2:00 PM No comments: 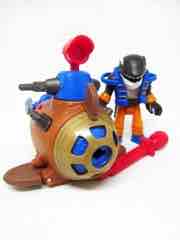 It's not a  Battle Beasts figure, but what is these days?

The Imaginext line has been a pretty good mix of toys aimed at younger boys. You've got big licenses like Spongebob Squarepants and Batman alongside home-grown lines of pirates, planes, monsters, castles, and interestingly no sign of He-Man. Part of a recent Pirates range, the Shark Minisub is really neither. You get an orca figure and some sort of barrel-based jetski with a periscope. It sold for about $7 and I recently realized I had missed it, and due to the Battle Beasts nature of the figure I had to run out and find one. Thankfully Kohl's rarely marks things down in a timely fashion, so it was reasonably easy to find one. The bulk of the rest of the line are humanoid sharks, with a mix of sea life and strange mechanical things. There's a Shark Mech Suit, which I don't need per se but I'm not going to skip it if I see one in a store again. The line also has numerous human pirates, including a Captain Hook-esque scallywag and Davey Jones (sadly not Davy Jones), and several others. I gravitate toward the weird humanoid animals.
[ READ THE FULL REVIEW ] 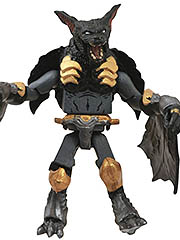