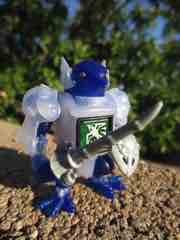 I don't know what Bamet Burst is. I'm no ornithologist, and since he doesn't even have wings I might be missing some larger point. This clear version (as well as the painted version) are awesome-looking figures but as to authenticity, I'm too bird-ignorant to know what it is I'm looking at here.
The figure has 4 points of articulation and is is pretty clear. The jewel-like look is really nicely done here, as the clear, sort of colorless plastic is set of by a rich, deep clear blue. Devoid of paint save for his gold eyes, the figure looks really weird. And great. The sculpt is wonderful, but the color combination feels like a product which fell out of a time warp. This is like the negative-universe version of another real toy.
[ READ THE FULL REVIEW ]
Posted by Adam16bit at 4:25 PM 1 comment: 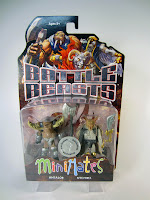 As part of a mid-February reset, Toys R Us stores near you most likely have their Diamond Select Toys Battle Beasts Minimates in stores now, marking the first time in roughly 25 years that those two words appeared on figure 2-packs in the USA.  Each set is $7.49, and they are decorated differently than those sold to the comic book shops.  Toys R Us also has an exclusive pair of beasts, pictured here.

We've all waited a long time for this day, so good hunting this weekend Beast fans!
Posted by Adam16bit at 12:08 PM 1 comment:

As we've said in the past, there's an update: and that's that there is no update.

As far as I could tell, Beast Saga was not on display in any form at New York Toy Fair.  Hasbro didn't show it and nobody else seems to be importing it.

Diamond Select Toys' Battle Beasts line was nowhere to be seen inside Diamond's booth.  I was told the line was not dead... just that there was nothing to show right now.

Naturally there was no Armorvor presence, and I didn't see any sign of Rise of the Beasts or other similar toys

There was an awful lot of Legends of Chima in standard LEGO minifigure scale plus larger, Bionicle-sized "constraction" kits.  We'll be posting a gallery of a few dozen images over the next day or two.  I just got home from New York as I type this and need to finish things up and go to bed after being up for almost a solid day.
Posted by Adam16bit at 11:23 PM 1 comment: 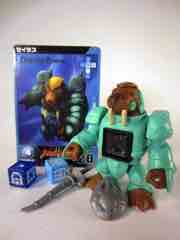 When I had initially pre-ordered Beast Saga figures in 2012, Seylas the walrus was pictured as a "blind box" figure. He didn't come in the blind boxes... clear guys did. I wasn't too thrilled about that. The original Wolfgang Walrus is one of my favorite toys and the new Gruntos toy (review to come) is a delight. As creatures go they're big, tubby, cold-loving, and mean. What's not to love?
[ READ THE FULL REVIEW ] 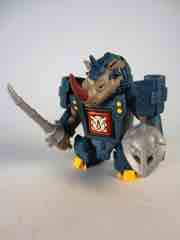 When seeing Rynas, it was pretty obvious he was going to be great. He is! He has big bulky armor, a huge head with a chunk of Rhino body sitting on his neck, and repurposed Bamet (the series 1 bird) weapons. He's hard not to like. The blood-red horn is an interesting touch, a rare whimsical coloration in an otherwise fairly realistic series of creature heads... which happen to be planted on anthropomorphic cyborg bodies.
[ READ THE FULL REVIEW ]