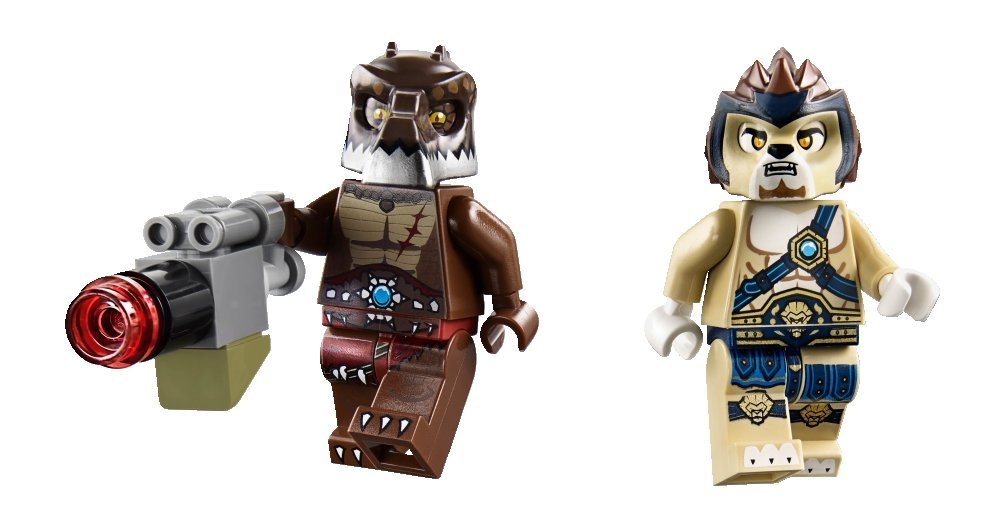 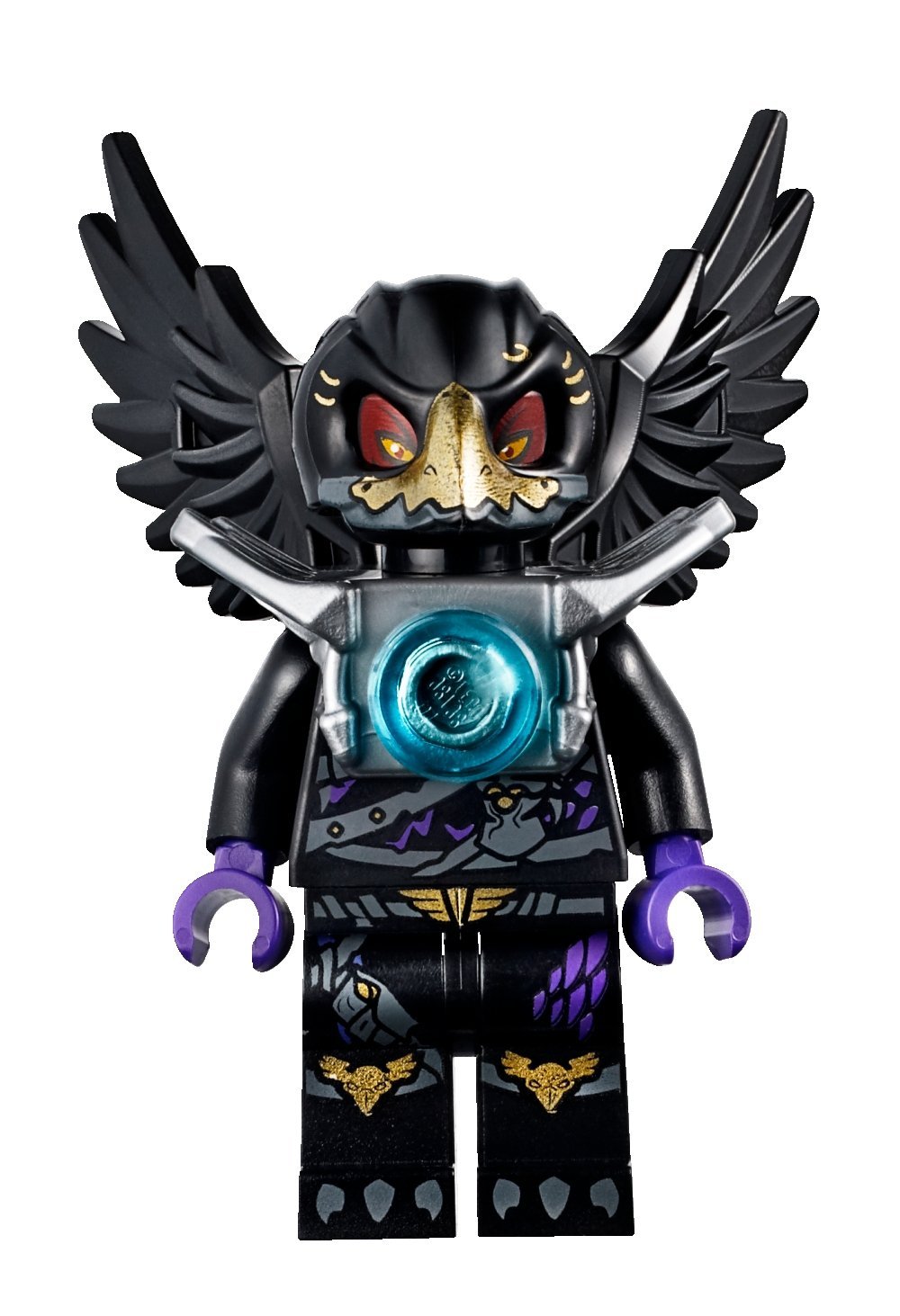 What's new for Legends of Chima?  Brickshelf put up an amazing gallery of new toys which are probably going to start showing up in a store near you at the time I finish typing this sentence.

Each set includes one or more beast figures, weapons, and a nifty vehicle.  The biggest boat in the line even includes one of the new, fancy brick separators.

You can see 9 sets in the Brickshelf gallery including some pretty decent close-ups of the figures.  As the follow-up to Ninjago it looks pretty decent!  Of all the new Beast-esque lines, this is the one that'll probably get the most marketing dollars and distribution.
Posted by Adam16bit at 5:17 PM No comments:


While the "Sea Death" set is the gem of the launch window, there's no denying that the Kingdom of Gloria action figure set is worth a look as well. Raioga the Lion has unique accessories in this set, and he's joined by Jidam the Hamster and Big Serow the Deer. As with the single figures, they have shields, melee weapons, dice, and trading cards. 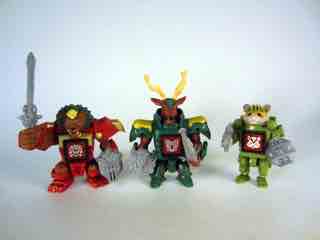 Each figure has 4 points of articulation and is made of a soft, rubbery plastic. Since the figures have closed fists, getting the weapons in there can be a tight fit. Each figure has a hard plastic die launcher in their chest which has a swell light-piping effect making use of clear plastic and a tiny prism.
[ READ THE FULL REVIEW ]
Posted by Adam16bit at 1:29 AM No comments:

Television: where no beast has gone before!  While the original Battle Beasts got cameos on Transformers: Headmasters and a few TV spots, there were no cartoons for any of these guys or their descendants until now!

Japanese TV will begin airing Beast Saga as a cartoon for you anime fans starting in January 2013. 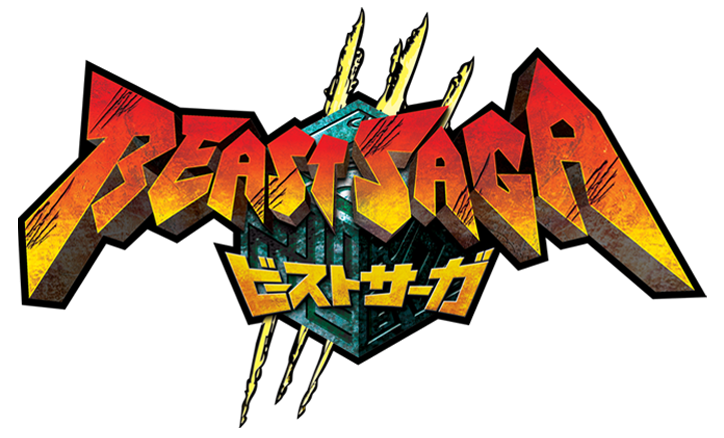 The site is in Japanese and has no active links yet, but hey, there it is.  I'm sure someone will have it streaming somewhere, somehow, soon into the new  year.
Posted by Adam16bit at 4:22 PM No comments: 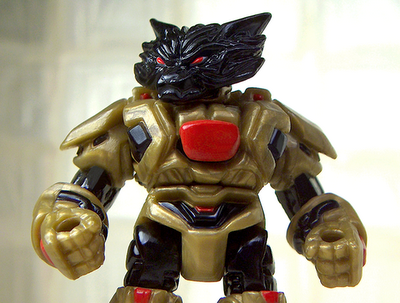 The Armorvor Aurustell Elite is coming Friday!
For $8, it'll likely sell out pretty quickly  I suggest you read the Glyos Transmissions Web Log and cross your fingers the Toy Gods shine a ray of mercy on your beast-collecting soul.
Posted by Adam16bit at 10:28 PM 1 comment:

The third Armorvor to sell out is the clear, unpainted, colorless Stealth Armorvor. While I personally am not too keen on clear figures, Onell Design seems to have a plastic that really shines if lit properly. I haven't seen a lot of discoloration either, so it's (so far, at least) easy to see this as quality stuff. Many fans buy clear figures not to keep, but to customize by dying them red or green or some other color and you can find some really spiffy designs on the October Toys Forums and elsewhere.
[ READ THE FULL REVIEW ]
Posted by Adam16bit at 9:22 PM No comments:

If you're anything like me, this is the moment you've been waiting for!  This is as close as the Battle Beasts Minimates will be to the mass market this year, and not only do they look great, but for the first time that I've seen - they have names!  Check out this awesome group shot. 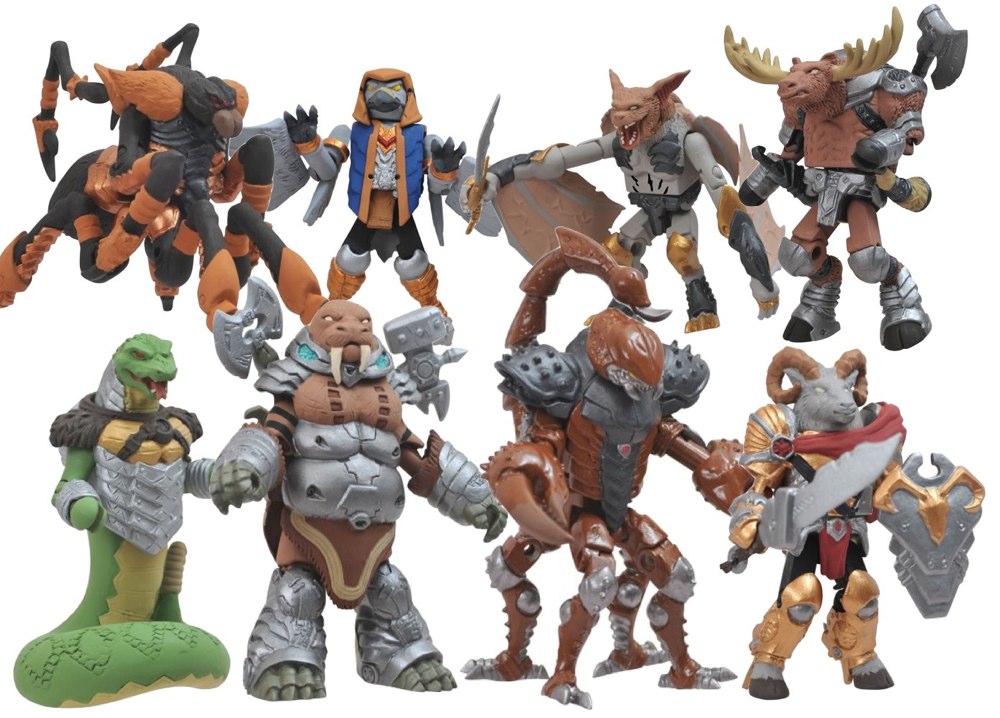 Individual 2-pack pics, information, and names are after the cut.  (It's a lot of stuff.)  I hope you're excited... because MOOSE. 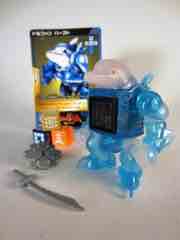 While initial solicitations seemed to indicate the assortment of Beast Saga figures would include unique and new sculpts, this was a lie. So those of us who preordered a case got figures like Dolphin Burst, a clear redeco of a pretty solid design. Almost completely devoid of paint (save for the eyes and dice), the Dolphin Burst seems to be cast in a mix of clear blue and milky white plastics to give it an appearance that's quite unlike anything I've seen as of late. "Clear white" or "milky white" is pretty uncommon in toys, and this 2 1/3-inch tall figure is a nifty one.
[ READ THE FULL REVIEW ]

Ours are on the way, but why wait for Americans to review things when the Japanese already have awesome photos up?  Check out a gallery of most of BS-20, the DX Starter Set, as well as Rynas. 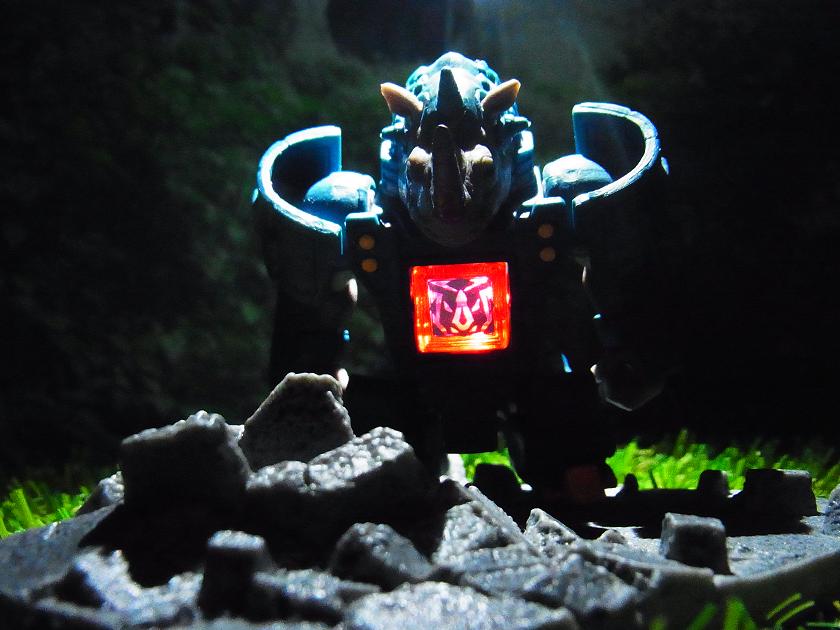 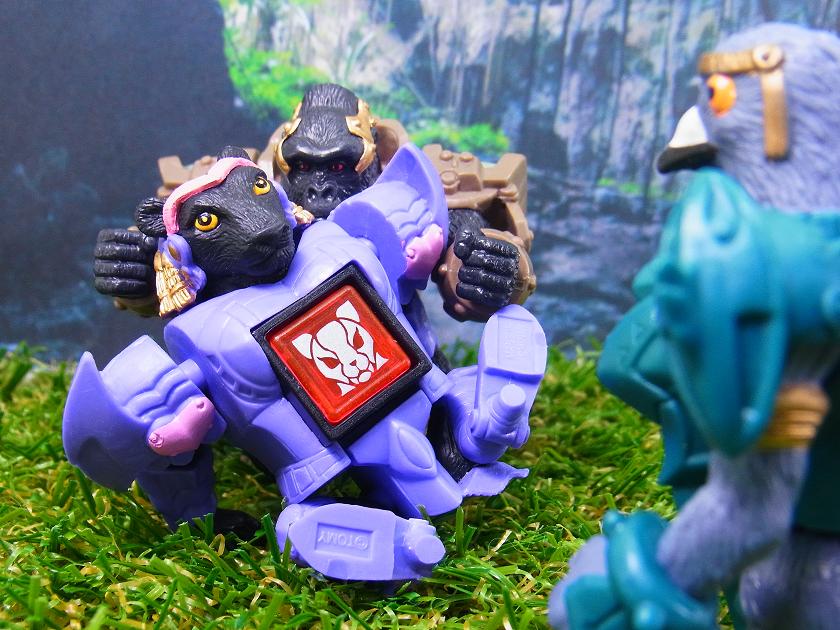 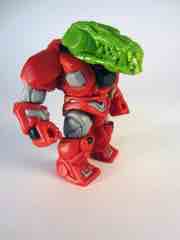 From the initial lump of clay to the product being in my house, a mere 3 weeks and change went by and I got a CyberGator head of my very own. This head was sculpted by Jason Frailey (the guy who sculpted the Armorvor figure design) as an alternate head for that figure, but as of right now there are no plans to mass-produce it in PVC. The GodBeast, a Glyos fan and amazing maker of toy things, cast the head and is now turning out some high-quality copies of the head, and the neck peg fits pretty perfectly in the Armorvor body as you can see. The catch? It comes unpainted, so if you don't have the equipment, skills, or expertise, it's basically a kit you'll never complete. Unless you're crafty, in which case it's a great (if not cheap) add-on to one of the more fun Glyos releases of the year.
[ READ THE FULL REVIEW ]
Posted by Adam16bit at 9:25 AM No comments:

Behold, the Takara-Tomy Beast Saga Dice Arena BS-14!  It's not very effective. Watch the video, and bonus points to you for clicking on the ads so I get a nickel. Thank you for watching!
Posted by Adam16bit at 1:28 PM 5 comments: 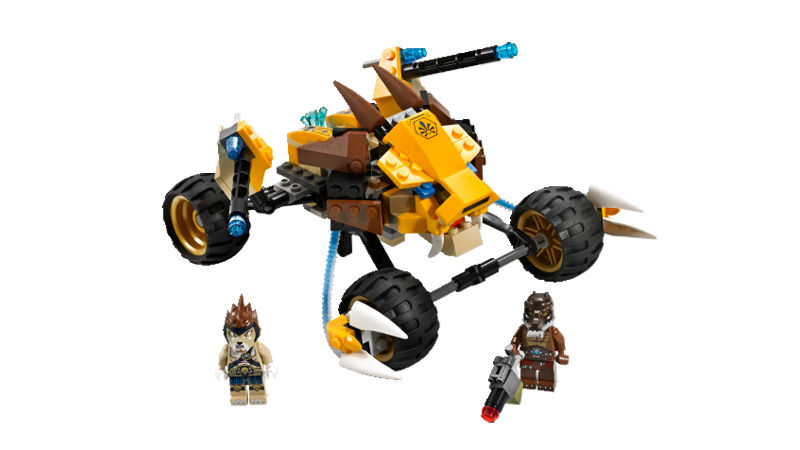 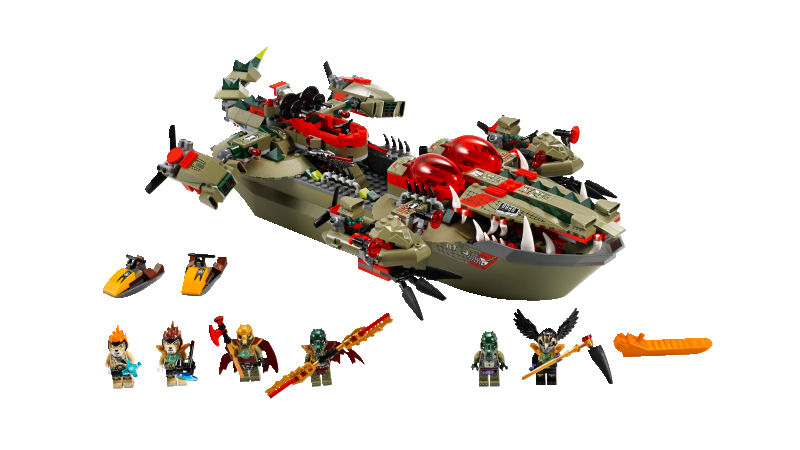 You can see several figures and sets at Eurobricks.  There's not too much variety in the figure species, but the vehicles range from so-so to mind-bogglingly compelling.
Posted by Adam16bit at 5:29 PM No comments: