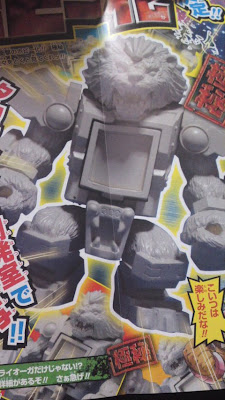 Maybe! Your pal and mine Sylvain directed me to this Twitpic and as I am barely literate I only have what he told me to go on.

How big is it? No idea. Who's making it? Not sure, but speculation is pointing to BanDai because they own the magazine which the comic appeared I am later hearing there's a Takara/Tomy copyright on the page. Why does his crotch have fangs, and does this make it a her? Also, not sure yet. Stop asking so many questions! I'm giving you everything I got!

As of right now there is no known connection between Beast Saga and the Diamond Battle Beasts announcement taking place this week, but the week is still young. Stay tuned!

UPDATE: You can find a little bit of a translation, here.
Posted by Adam16bit at 12:19 AM