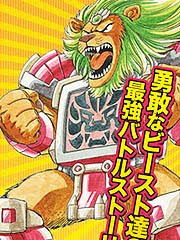 Let me be perfectly clear when I say that this Beast Saga manga from Saikyo Jump is so new I don't know what the deal with it is yet. I do not speak Japanese, so if you do, please email me or comment below to fill in what you can read here!

From what I've asked around and gathered so far: Saikyo Jump is a Japanese manga publication for young boys which exists primarily to sell toys and licensed products. As of yet, no known licensed products for Beast Saga have been announced. It is not explicitly obvious if Takara/Tomy/etc. are in any way involved. It is not known what, if any, toys may be made for it. For all we know it could be some weird mutation like what the newer Ultimate MUSCLE was of the original MUSCLE/Kinnikuman mini figures.

The character designs are tough to make out, but a red-armored green-maned lion looks unquestionably Battle Beasts/Beastformers-esque complete with a swell faction logo on his chest.

Special thanks to Zac for his insights and to Sylvain for emailing me to let me know about this new publication.
Posted by Adam16bit at 5:19 PM No comments:

After the tremendous outpouring of support (and money) to the tune of 170 fans at an average of $99.83 per figure, it turns out there was another... shortcoming. (See what I did there?)

This morning, rep Jon Karis had this to say on the Little Rubber Guys forums:
"I found out this morning that the factory came back late last night and said they can only do the figures at the 80mm scale which is 1/3 larger than the 60mm they promised. According to them, 60mm is just too small for them to handle. There was simply not enough time to notify everyone and give them the option of cancelling their pledge. Had this news come a week ago, an update would have gone out letting people know and the Kickstarter would have lived or died based on the 80mm size change. So really, the only option was to cancel.
That being said. The gold lion has already been paid for and is being made at 80mm instead. It will be available for free to everyone who pledged at the $45 or higher level (as promised).

The upside of this whole situation is that there are a couple other avenues that will allow the figures to be made at 60mm and sooner. Just not at this manufacturer.

I just found out about this deal breaker early this morning, P! found out late last night. So rather than take your money and hope for the best, we cancelled. There really was no other option.I hope this provides some clarification for those of you who are rightfully upset and confused. For those of you who are still pissed after reading this, all I can say is I am sorry that we hit this bump, but cancelling the Kickstarter was absolutely the right thing to do, based on the last minute info from the factory.

I will gladly take egg on my face over this hiccup, when the alternative was letting the project fund and taking a gamble with your money.

I'm sorry guys, but there really was no other way."

Rise of the Beasts: Another Upcoming Figure 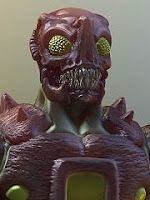 Apparently this ugly character is a concept for series 3. I'm not sure what it is... a bug of some sort, but wow, hideous. This looks like it stepped right out of a 1980s fantasy toy line package illustration. Read more about it here on the Rise of the Beasts Kickstarter page, which, at press time, has about 10 hours to go.

For those of you waiting for more on Diamond's Battle Beasts, like I am, sit tight-- we should know more in about a month. But for now, enjoy whatever the heck that nightmare is to the left. I look forward to owning one.
Posted by Adam16bit at 9:11 PM 1 comment: 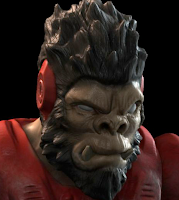 We've all heard of Japanese Laser Beasts and Greek Battle Beasts. Some of us know of the various bootlegs. But I've never heard of the Russian Battle Beasts before! Марти Иден sent me this gallery of "all known local modifications of Battle Beasts." Fascinating!

Another gallery made the rounds on the collector forums. Weird wild stuff! Check it out, and now you know that Russia had tons of toys and none of us have any clue what sort of wild, crazy, and otherwise interesting toys are there.
Posted by Adam16bit at 8:45 PM No comments:

Rise of the Beasts Update

1. It looks like there will be two exclusive sets of Rise of the Beasts. If you've been watching the supporters like I have, it's pretty east to figure out that it looks like Big Bad Toy Store and UofMuscle.com will be getting their own repaints of these figures. Nice!