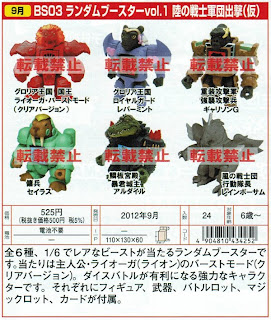 Commence pants-dumping jokes, because painted Beast Saga figures and pricing in Japan have been revealed! In short: they're not expensive, but not as cheap as what Diamond's line is likely to be in the USA. RobotKingdom posted a ton of pictures to Facebook of Transformers and, of course, the Beasts. Their store doesn't have pre-orders up yet, but hey, it's early.

Of particular interest: they don't have the traditional "Battle Beasts" eyes, the single-color robotic peepers like the figures of the 1980s-- Diamond's line artwork appears to have retained this trait. On the other hand, Beast Saga seems to have more in the way of cybernetic elements and insane goggles. So I'm not crowning either as "better" just yet, as each line seems to have familiar classic elements and new changes making neither "just like the originals" just yet. 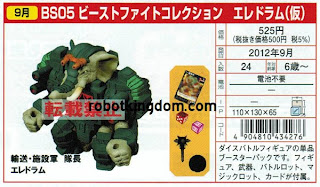 WHO: TakaraTomy will be making these
WHEN: Ship date is September
HOW MUCH: About $7ish per figure, it appears there will be singles and multi-packs
WHAT: The chest squares are actually some sort of dice launchers
HOW BIG: If I'm reading the pictures right, the box is about 60mm tall, which is pretty close to the originals 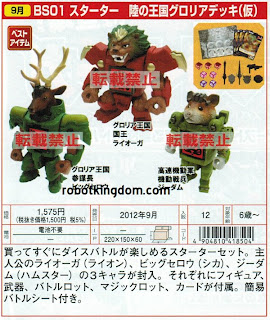 So far it looks like we're looking at a minimum of 18 figures, some die packs, a game board of some sort, and a bunch of things I don't know because I don't speak Japanese. There is no known plan for a US release, but the year is young, and sometimes Hasbro or whoever sits on this stuff for a convention or something. What I do know is this: set aside $150-$200 if you want in on this action. Minimum. These might be blind boxes, I can't tell.
Posted by Adam16bit at 11:48 PM