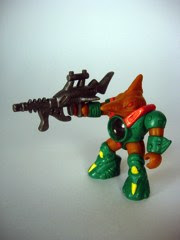 One of the most fascinating things about toy lines in the 1980s and 1990s is as they wind down, nobody really knew what was going on at the time. The final series of Star Wars, Battle Beasts, and other lines were tough to tell because with no real marketing support, no internet, and no resources, rumors and "my cousin got this somehow" were our main sources of intel. As such, I have vague memories of the final US series called "Shadow Warriors" (Laser Beasts in Japan) and I didn't really have much of awareness of the line (beyond it existing) until recently. Heck, I didn't even intend on getting Spark Shark until he showed up in a collection with a bunch of rubsign figures I was after. By himself, he sells for $15-$20 (no weapon) and $30-$35 (with weapon), and he's probably the cheapest and seemingly most commonly sold Laser Beasts figure.
[ READ THE FULL REVIEW ]
Posted by Adam16bit at 9:55 AM