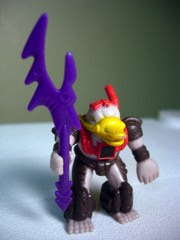 Series 3 of Battle Beasts was thought by many (myself included) to be the end of the line-- additional "Shadow Beasts" and "Laser Beasts" were issued in very limited numbers in the USA, Europe, and Japan, but it seemed to my not-old-enough-to-go-on-a-toy-run-self that Diving Duckbill and friends were the end of the line at the time. The sets were increased from randomly-packed pairs to a specific group of 8 figures, which was more exciting from a gift standpoint but slightly less so if you had to basically whine like a little bitch to convince your parents that yes, you should be able to take the ten bucks your aunt sent you to get yet another batch of these little guys. (This set was particularly awesome, containing a Zebra, Penguin, Flamingo, and Orangutan among others.)
[ READ THE FULL REVIEW ]
Posted by Adam16bit at 10:53 AM