Can you read Japanese? If so, feel free to make yourself at home in our comment section and translate to your heart's content! 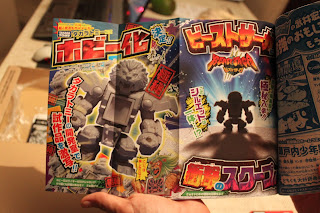 Your pal Sylvain strikes again! He sent along two notable pictures, the above shows a TakaraTomy logo on the figures, meaning, well, it looks like this could well be a sequel to Battle Beasts, so feel free to start speculating wildly about reissues of the 1980s figures, or if given the different name "Beast Saga" means there might be some global launch involving Hasbro, as, after all, Hasbro has a long relationship with TakaraTomy, Takara, and Tomy with the likes of Beyblade, Zoids, Transformers, and the original Battle Beasts. 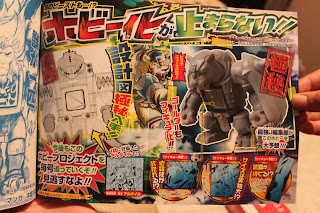 The second one shows a new tiger figure prototype sculpt and some sort of alligator, because we didn't get enough of those in the last couple of years. Thanks for emailing us these pictures overnight, Sylvain!
Posted by Adam16bit at 9:42 AM