If you were looking to pick up the clear Stealth Armorvor or the black Hades Mimic Armorvor at Onell Design, we hope you got yours! The black version was gone in about 8 minutes, while the clear lasted under 15, selling through even faster than the red Venjorun Armorvor despite the numbers being reportedly higher.  (You'll recall, the red Venjorun figure was a surprise launch and it still sold out in under an hour.) 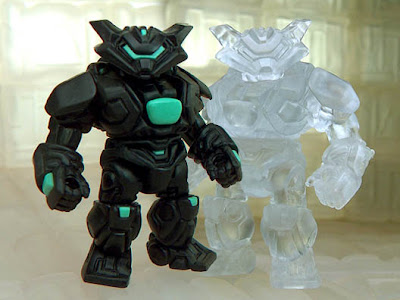 Some points to consider if you missed the Armorvors so far, at the risk of coming off Pollyanna-ish:
In the Onell Design Glyos Transmissions Web Log, Matt from Onell also had this to say:
"We will have 3 all new styles available in mid October, and then a larger run of new styles in late November. Hopefully this will even the equation out."

So it looks like they may well build into an army by year's end!  But hey, don't forget there are lots of other Beasts on deck while you wait for an Armorvor.  Beast Saga will hit Japan in the coming week.   Diamond Select's awesome Battle Beasts are due out late this year or early next year, and there's a comic book you can go get right now.  And who the heck knows what The God Beast has planned in his mysterious plastic factory of wonders between now and the holidays?

So in short: don't overpay on eBay. Wait it out.  Reissues or similar figures should be making the rounds again in the future!
Posted by Adam16bit at 11:06 PM