The blind box breakdown!  Upon the toys' initial solicitation, the photographs lead us to believe that we'd get painted figures like a walrus in here.  Well, those were wrong.  Beast Saga BS-03 features clear, mostly unpainted repaints of figures from the single- and multi-packs, so those looking to collect one of each character could, in theory, skip these without guilt. 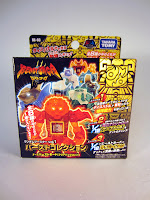 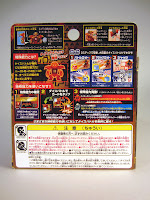 Each blind box seems to be devoid of markings, and the interior packaging is ridiculous.  The weapons, dice, figure, and trading card are each packed separately in black plastic opaque baggies.  There are multiple cardboard chunks - in addition to an insert - which seem more than a little wasteful.  Takara-Tomy went out of their way to make sure you can't guess which figure you get without cracking one open first.

Here's what we found in our case, and this corresponds to others who also purchased a case.

Construction:
The clear figures appear to have nearly-identical accessories to the painted ones, save for the exceptions above.  Same character face dice, but the "bonus" ones have other powers or numbers on them and may be random themselves.

Interestingly, figures were sorted by layer-- so certain characters tended to cluster together.  The top layer of the case included the 3 Dolphin figures, a bat, a lion, and a shark, which just happened to include all 4 chase pieces for those looking to cherry-pick.  The bat had a gold die, the dolphin had a gold die, and the lion and shark each had a gold-bordered card.  This is pretty consistent with what we're hearing from other collectors.

The bad news: those of us who preordered with expectations of unique characters did not get any. And there's no sign of the walrus yet.
Posted by Adam16bit at 11:24 PM