Rise of the Beasts: An Update! 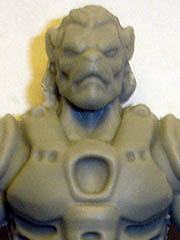 Originally pitched as a Kickstarter line, Rise of the Beasts has experienced a few delays since debuting online earlier this year.

Line curator/producer/nice guy JKARIS let us know there's some news!  For starters, this post on LittleRubberGuys.com's forums has a much larger, full-body shot of the guy on the left (which looks vastly improved over the last incarnation) with the following dirt:

"I should be sending 2 of these to 80mm lions China for reference this coming week.  They can use the two to make 1 articulated version to make the metal mold from."

Hoorah! This is for the 80mm (closer to 3 3/4-inch) scale figure, and he sent in a message letting us know that work is indeed progressing on the smaller, 60mm figures.  Progress!
Posted by Adam16bit at 3:48 PM