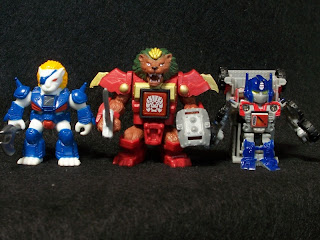 As we're still waiting for our box to show up, let's look to Japan again!  At this Japanese image sharing site, there are tons of nifty pictures of custom Dolphin figures with flamethrowers for reasons I do not understand at all.  There's also the much more understandishable comparison of Pirate Lion, Raioga, and Transformers Bot Shots Optimus Prime.   There's a good sense of scale! 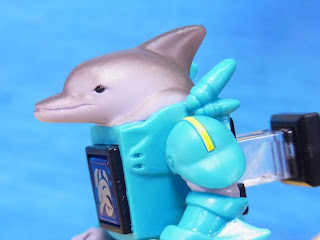 Another Japanese blog has a whole mess of shots of the Beast Saga Dolphin, or Dorufan, or whatever his name is.

If you scroll down, you'll see not only shots of the toy, you'll see some more customizations and a spliced-apart figure which reveals the reportedly Glyos-compatible (but not really purely Glyos) pegs, so some part-swapping might be possible.

Also, if you're impatient and/or have lots of money, check out this eBay auction (which might be closed by now) for all 8 blind-boxed translucent figures for about $146.   Which reminds me, I need to get some trading card sheets and a 3-ring binder for the cards!
Posted by Adam16bit at 6:06 AM