Two unpainted figures, called prototypes or promos or whatever you want to call them, are making the rounds on eBay! The good news is you can see them, the bad news is the seller wants $200 for the pair.  Jidam and Pirazon can be yours if the price is right, and they seem to be similar to the fully-painted figures coming out in a few weeks, minus the paint.

Reader akum6n has this to say:

"There are two methods of release for these figures. First, they were given out to participants at Saikyou V Jump Festa at Makuhari Messe (in Tokyo) on 7/21 and at Intex (in Osaka) on 7/28. These are probably the ones showing up on auction sites now. Second, the figures will also be given out through coupons in the September issue of Saikyou Jump (for Jidam) and October issue of V Jump (for Pirazon) that can be redeemed for the figures. Both issues became available last month. So, I suspect we will be able to pick these up eventually without paying the premium prices attached to those on eBay." 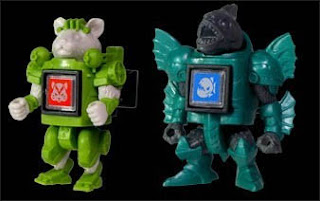 ...if you have a much cheaper lead on these, let us know in the comments or email us! We're interested!  (Well, if they're cheap or if you trade.)
Posted by Adam16bit at 12:34 AM