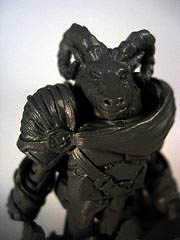 UPDATE: Diamond's own Zach Oat confirms it: "And there will also be a retailer incentive Minimate of Vorin in "stealth armor," available to comic shops that buy 25 copies of the comic."

The reliable, informed, and all-around nice dude Luke posted this little tidbit on the Minimate Multiverse boards.  So it's good news since it's a new figure... and potentially bad news for those of us aiming for a "complete set." Remember that blurb about their being a retailer incentive figure?  Well, apparently you gotta order a lot of comics to get it. Luke writes:

"This [retailer incentive] figure will be a 'Stealth Black Vorin' according to my Diamond rep. It will only be available through this promotion. We will not be carrying them, as we don't sell comics. If the number [of comics to order to get one figure] was lower than 25 I would consider it. "

As the comic book will be around $4, it wouldn't be out of line to expect the figure to sell for mid-double digits.  I'll be watching eBay, as the possibility of having a hole in my collection right out the gate is troubling.  Of course, the wholesale value of 25 comics is probably in the $50-$65 range, so hey, maybe you might buy a bunch to have something to hand out to the older trick-or-treaters?
Posted by Adam16bit at 10:40 PM