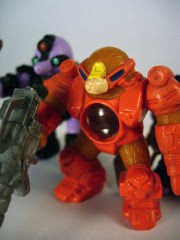 When Diamond Select announced their plan to revive the Battle Beasts brand, that was my indicator to jump on the vintage guys-- people were ignoring them, and they may still be ignoring them, but I wanted to get as many as I could before that changes. (For the record, I completed a US set as of March.) Anarchy was one of the few Laser Beasts I picked up as he wasn't too pricey, and was pretty cool as another mole in this series. With a drill arm and a drill weapon, thematically, he's pretty awesome as a construction/destruction/explorer type.
[ READ THE FULL REVIEW ]
Posted by Adam16bit at 11:24 AM