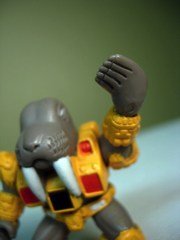 Series 2 of Battle Beasts refined the figures a little bit with better paint jobs, stranger figure choices, and big changes to their feet. The copyright information was moved to the soles of the figures, and a foot peg hole was added-- previously released Series 1 figures had flat feet (like Gormiti toys) and the copyright information was usually on their backs. Wolfgang Walrus is a fine example of a good concept refined in its second series, and he also just happens to look more than a little like the Transformers toy Longtooth. As I'm a sucker for ocean life toys, this was one of the many figures I requested as a kid and by gum I've still got him.
[ READ THE FULL REVIEW ]
Posted by Adam16bit at 8:51 AM