Beast Saga Figures Hitting Japan As You Read This 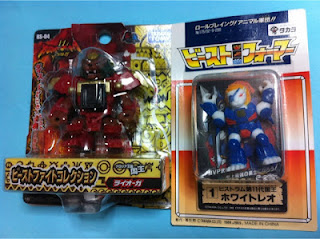 Your pal and mine Sylvain posted pictures from a guy in Japan named Syncson, which show the first-ever look at packaged Beast Saga figures next to an old-school Battle Beasts figure.

At first glance the new Beast Saga lion looks larger, but if you cut him out in Photoshop and put him side-by-side with the Battle Beasts guy, the new figure seems only slightly larger.

American fans, it's not yet known exactly when the importers will have theirs but it's presumably going to be pretty soon.  Be sure to apologize to your wives and significant others before the credit card statements arrive in October.
Posted by Adam16bit at 11:05 PM